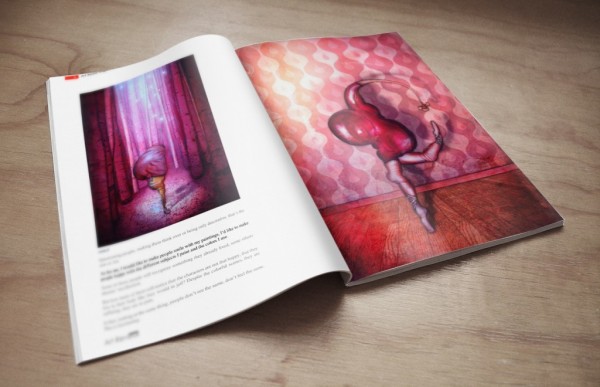 Art Reveal Magazine is dedicated to the promotion and publication of independent artists from all countries and all visual art genres.
This art magazine aims to support and promote artistic work and unearth young talent from any corner of the world.
Each issue of the magazine presents several contemporary artists portfolios. This presentation is about 5 or 6 pages, pictures are accompanied by an interview.

This magazine is independently since November 2014. This team comes from the artistic section of a student magazine, decided to make his own art magazine with the aim not only to discover these artists but also to guide in their career path.

Here is the interview

1- About
Questionning people, making them think over or being only decorative, that’s the aim or Art.
As for me, I would like to make people smile with my paintings, I’d like to make people happy with the different subjects I paint and the colors I use.
Some of these people will recognize something they already lived, some others dreams’ recollection.
But how many of them will notice that the characters are not that happy, that they live in their body like they would in jail ? Despite the colorful scenes, they are suffering, they are in pain.
In fact, looking at the same thing, people don’t see the same, don’t feel the same. This is fascinating.

2- When, how and why started you creating?
I’ve always been attracted by artistic jobs. I wanted to be a photograph when I was a child.
I had great relations with my uncle and my grand-parents. The 3 were artists and I was really admiring them. They definitively influenced my likings and my choses.
I didn’t like school, I felt excluded, I used to stay alone, and I didn’t like being with the other kids.
I preferred working on my artistic creations.
Later, when I was 17, I decided to leave school and went studying in an Art Acadmy.

3- Who or what has a lasting influence on your art practice?
I‘ve always been influenced by what we call “bad taste”, people can like things and for others, these things are absolutely awful. How can eyes show things so differently from one to another?
People’s everyday life interests me. That’s why I was influenced by Jeff Koons, Edouard Boubat, Robert Doineau or Voutch, for example.
I’ve always had weight problems. As a child, I was fat, then very fat when I was a teen, I never felt at ease in my body.
I was 18 when I was operated from my teeth, and after it, I had to stay with my mouth closed. Then I lost 40 kilos in only 2 months.
The scales jumped from 110 to 70 kilos.
I didn’t recognize myself in the mirror, this new body was not mine.
Since then, I‘ve been literally attracted by deformation and body defformities.
I started to appreciate artists like Lucien Freud, Fermando Botero, Francis Bacon, Jean Rustin or Leigh Bowery.
I also like color, I find it fairy. So photographs like Pierre and Gilles or David Lachapelle also bring their influence.

4- What are your future plans as an artist?
I finished several paintings for 2 international contemporary art fairs in Hong Kong (China) and Singapore (Asia), and for 2 art galleries in Paris, France.
For now, I’m working on a painting that will leave for Korea next week.
On 13th and 14th of June, there is the annual opening days of my studio, so I’m preparing works for these 2 days also.

5- What do you dislike about the art world?
I don’t really like performances or installations such as, for example, a TV set showing the same picture, with an object just besides, in an empty room. I don’t understand the artistic approach of these artists.
Some of these so-called artists are recognized and successful, or sell a lot of their works which are not, to my opinion, quality works.
Just because they are in fashion.
This is something I don’t really understand.

6- What is your dream project?
I already showed my works overseas. A few years ago, I dreamt about exhibiting in the United States, then in Japan.
These 2 wished are granted.
Now I would like to publish my 3rd book, with more personal works.
I would also like to work and exhibit very large sizes.

7- What’s the best art tip you’ve ever received?
All along my artistic studies, my illustration teacher influenced my work.
I listened to all advises he could give me during the 3 years I spent in his class.
One of the most important is one of the firsts. That was the year before starting my studies in this school. I used go to evening-school, he was my teacher, and when I showed him the work he had asked for, he had encouraging words, so I went on with art.
I think my artistic sensibility comes from his advises. 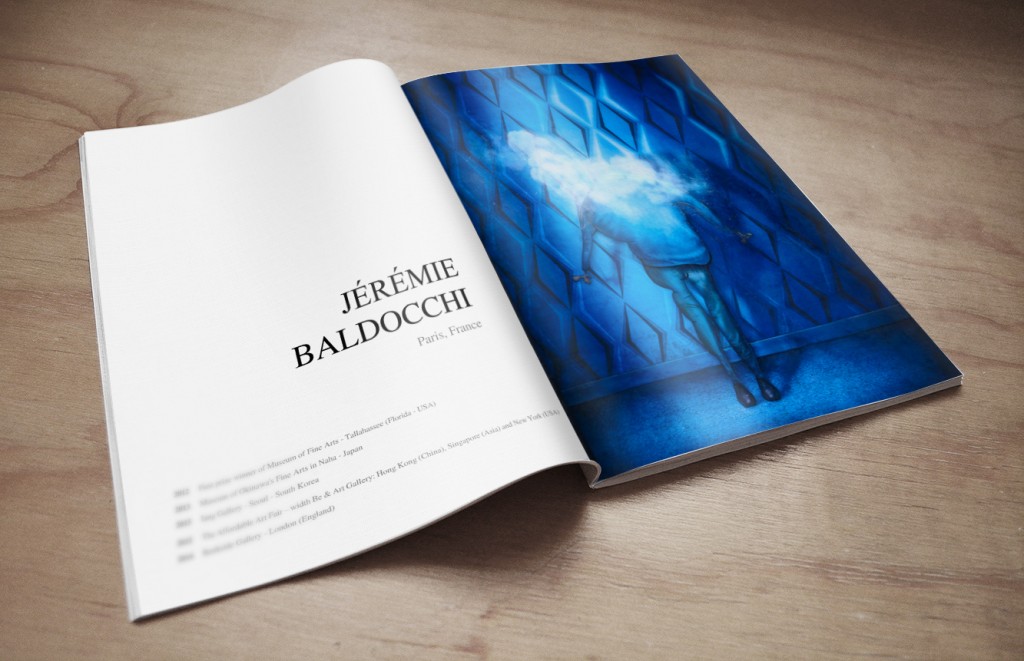 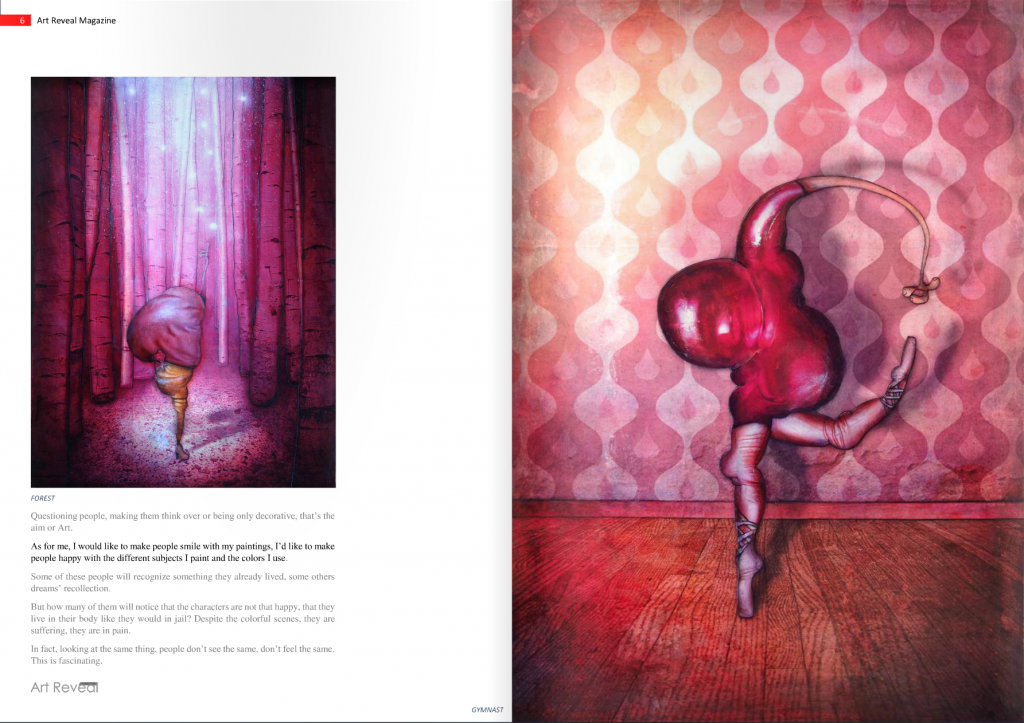 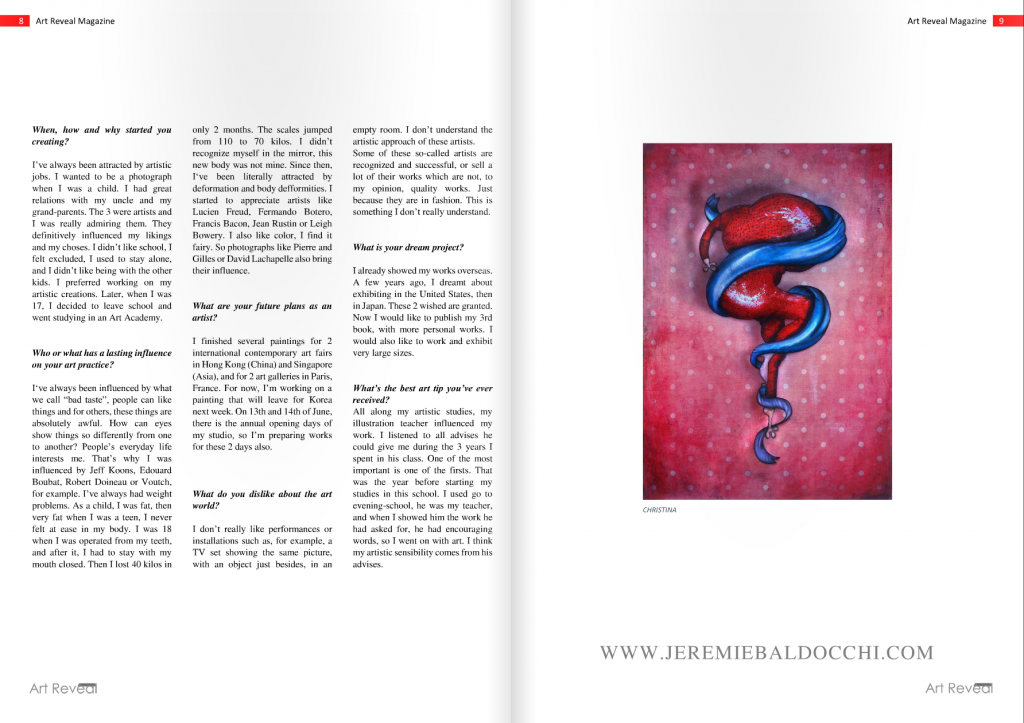