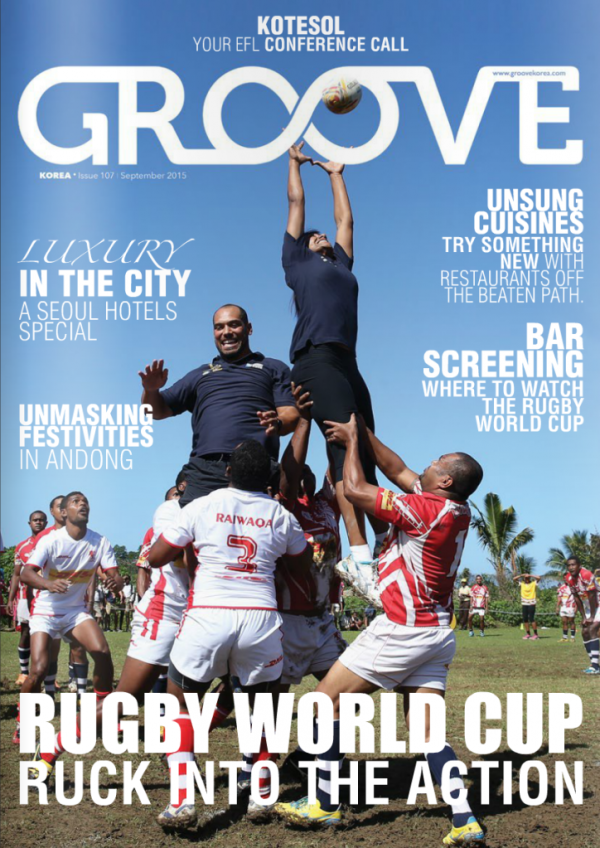 The “Groove Korea” magazine talking about my work after my next participation in the contemporary art fair Affordable Art Fair Seoul in South Korea in September.
This magazine talks about culture and the latest trends.
It is one of the most read magazines in English the country, with a circulation of 23,000 copies.

Here is the link to the article:See the magazine’s website here

Jeremie Baldocchi is an accomplished artist who describes his paintings as “unusual, original, disturbing, poetic and fairy tale-like.” He has won numerous awards in France and the USA, published two books, and has been exhibited all over the world. This year alone, his works will have been in Paris, Brussels, Singapore, Hong Kong, and London. Additionally, Jeremie’s art will be on display in Seoul at the Affordable Art Fair from September 11-13.

His paintings look like graphic novel art at first glance; but with a playful, twisted, abstract quality. Additionally, if one looks closer, they notice that Jeremie has a real flare for color, lighting, and texture. His patterns and lighting of his artwork background simply pop and memorize the imagination. The bright, friendly colors make you smile. The shapes first evoke cute, Korean and Japanese cartoon characters, but on second glance, are juxtaposed onto his own style of characters with the shapes representing somewhat estrangement and discomfort. Yet, his concrete references to pop-culture make the work seem familiar and accessible.

His paintings often feature familiar facets such as superheroes, beauty pageant contestants, and everyday home living; yet there’s a common theme throughout most of them. The figures are often missing their heads and have bloated, misshapen bodies. Not entertaining the morbid, Jeremie states there’s a reason for that.

Raised in Toulons, France, Jeremie came from an artistic family but never really fit in at school. “I didn’t like school, I felt excluded, I used to stay (there) alone, and I didn’t like being with the other kids. I spent more time distracting other students than study.” Additionally, his teachers were often trying to get him to learn and practice more conventional styles of art. Feeling estranged, Jeremie was lucky to have one teacher who inspired him.

On one fateful assignment, Jeremie couldn’t think of what the figure’s face should look like so he decided to submit his work without a head. His teacher loved it and the rest was history – and Jeremie’s future. Since then, most of Jeremie’s work has featured headless figures, which he feels “adds an element of interactivity to the image (as) the viewer can give free rein to his imagination.”

His fascination with malleable, misshapen bodies comes from a series of childhood experiences. Jeremie says he grew up fat and unhappy with his body. In a short period, around the age of 18, Jeremie had three medical conditions that changed his body and, thus, his art work. The most influential of these was a dental operation that caused him to lose 40kg in two months. “I didn’t recognize myself in the mirror; this new body was not mine. After this event, all the changes and deformities in my body became a real obsession. The bodies that I design are very influenced by this new “vision” of the body.”

This vision of the body isn’t the only thing that drives Jeremie’s unique artistic style. He also has a fascination with the ordinary, everyday minutiae of life. “People’s everyday life interests me. The foibles and habits of people and sometimes the absurdity of certain situations are my main source of inspiration.” Many of Jeremie’s art work are set in the kitchen or living room, depicting everyday scenes—albeit in a very strange way.

This strangeness also drives Jeremie’s vision. He has been attracted to “bad taste” and why something that’s ugly for one person can be fascinating for another. In fact, Jeremie isn’t at all snobbish about his art because he really loves the idea that people have completely different reactions to the same painting or experience. One of his artistic goals is to try and accurately represent, not what he sees in real life, but what is in his head—his personal reaction to the ugly or the ordinary. He hopes that people will connect with it by recognizing something from their own lives or dreams.

One of Jeremie’s artistic goals is to show something awkward and terrible but to make it beautiful. “I like the fact that the butcher wraps his piece of meat—dripping with blood and full of fat—in a pretty, rosy paper. How to make something “appetizing” which at first sight is not. This is what I try to recreate in my paintings.”

Ironically, although his paintings look bright and cheery, and he wants to make us smile, he also wonders if people will see the darkness that lies underneath. “How many of them will notice that the characters are not that happy, that they live in their body like they would in jail? Despite the colorful scenes, they are suffering, they are in pain.”

Jeremie doesn’t connect with all art, however. “I don’t really like performances or installations such as, for example, a TV set showing the same picture, with an object just besides, in an empty room. I don’t understand the artistic approach of these artists.” Jeremie thinks these artworks are profitable, but only because they’re fashionable and not because they are good. On the other hand, Jeremie loves photography and film. In fact, he considers his process to be similar to a filmmaker trying to find the right way to frame and color a scene.

For the Affordable Art Fair in Seoul, Jeremie is working on some new paintings that will show a different side of his work as they all feature animals. His work will be represented by the Be & Art Gallery of Paris. Although this will be his first exhibit in Korea, he isn’t a stranger to Asian art and has great things to say about Korean artists. “Traditional [Korean] art is a gold mine. The contemporary artists are very innovative. Korean art is always progressing. It is an important source of inspiration.”

As for aspiring artists, he advises that one must “be courageous and extremely motivated.” The hardest part of being an artist, for him, is the tedium of the logistical and business side of things: marketing, promoting, administration, and so forth. Also, lacking inspiration but having to carry on with your work anyway. Jeremie says that only about one-third of his work actually involved creating the art itself. On top of that, there is an emotional cost as well: “The life of an artist is of doubt and questions and lots of work. It’s also a real debate against others and yourself.” But seeing yourself exhibited, seeing your name in front of a venue, and talking with admirers all help make it worthwhile.

Jeremie’s not sure why his chose art as his profession, but thinks it probably has to do with all the bad and good things in his head: The experiences that tarnished his childhood as well as all the little things that delight him. And, like most of us, to leave a marker proving that he was here. 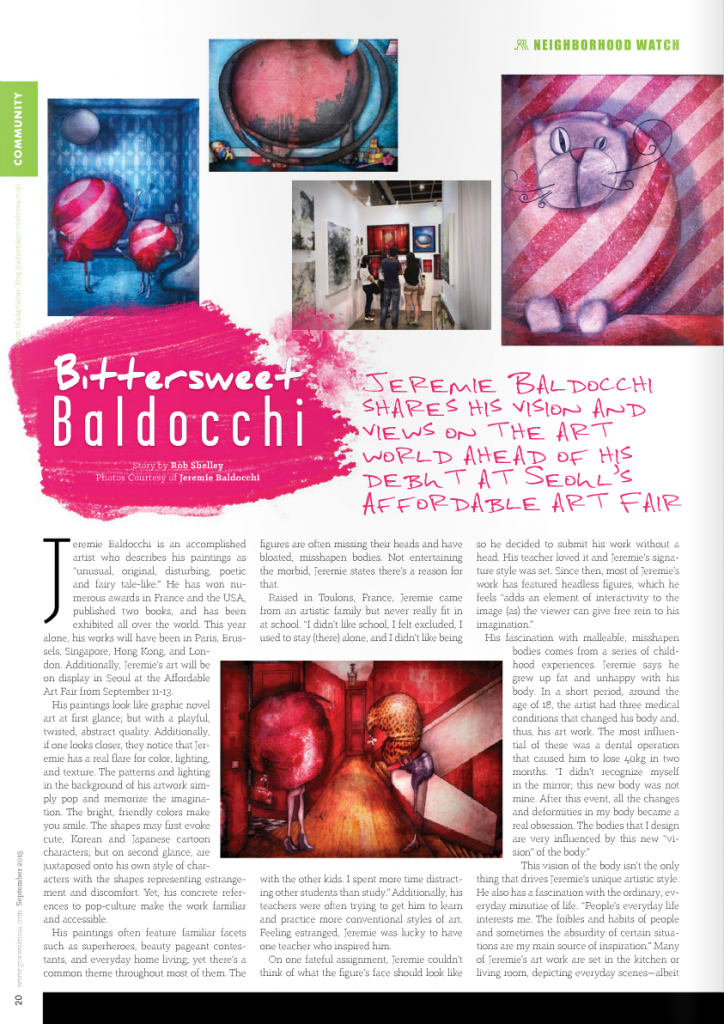 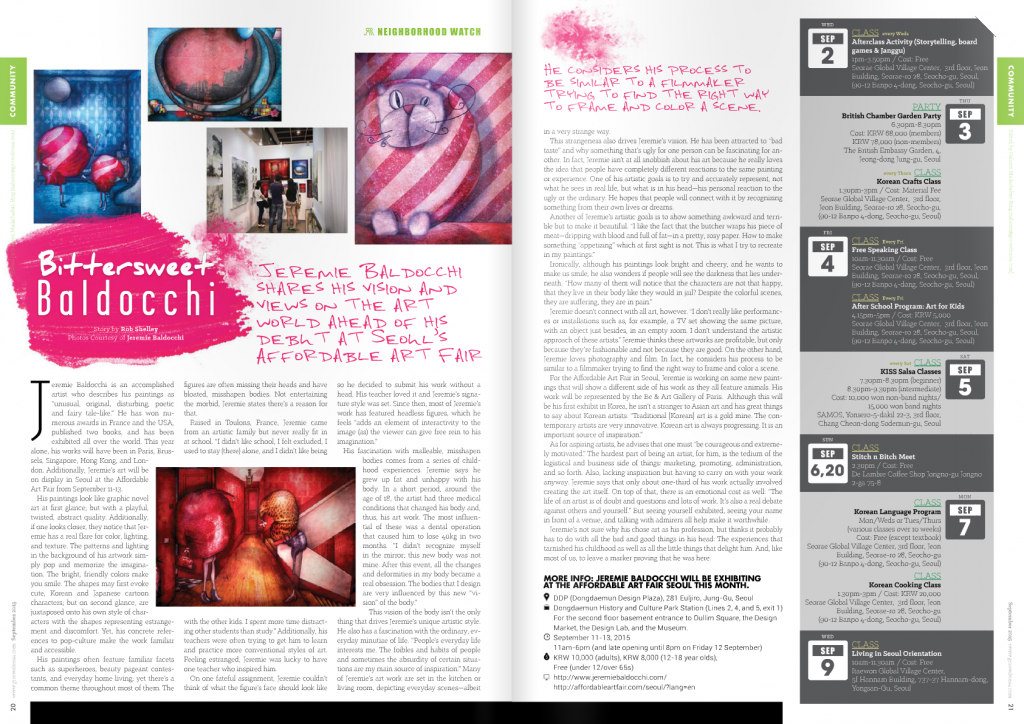